Link to this page

The Heron Hunt
Order a Hand-Painted Reproduction of this Painting 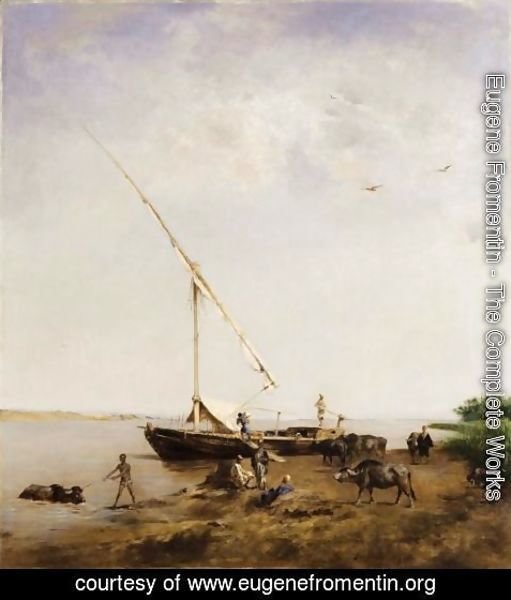 Eugene Fromentin french painter, was born at La Rochelle in December 1820. After leaving school he studied for some years under Louis Cabat, the landscape painter. Fromentin was one of the earliest pictorial interpreters of Algeria, having been able, while quite young, to visit the land and people that suggested the subjects of most of his works, and to store his memory as well as his portfolio with the picturesque and characteristic details of North African life. 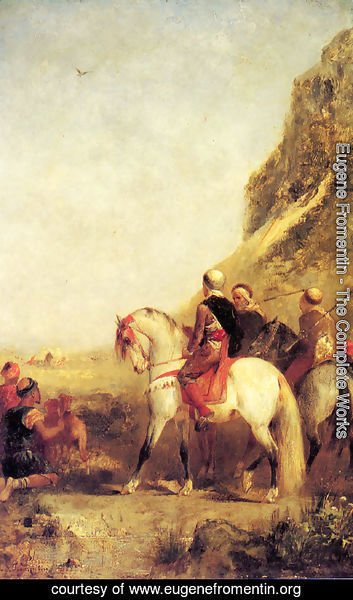 In 1849 he obtained a medal of the second class. In 1852 he paid a second visit to Algeria, accompanying an archaeological mission, and then completed that minute study of the scenery of the country and of the habits of its people which enabled him to give to his after-work the realistic accuracy that comes from intimate knowledge. In a certain sense his works are not more artistic results than contributions to ethnological science.

Fromentin was much influenced in style by Eugène Delacroix. His works are distinguished by striking composition, great dexterity of handling and brilliancy of colour. In them is given with great truth and refinement the unconscious grandeur of barbarian and animal attitudes and gestures. His later works, however, show signs of an exhausted vein and of an exhausted spirit, accompanied or caused by physical enfeeblement. But it must be observed that Fromentin's paintings show only one side of a genius that was perhaps even more felicitously expressed in literature, though of course with less profusion. Dominique, first published in the Revue des deux mondes in 1862, and dedicated to George Sand, is remarkable among the fiction of the century for delicate and imaginative observation and for emotional earnestness. Fromentin's other literary works are Visites artistiques (1852); Simples Pèlerinages (1856); Un etet maitres d'autrefois (1876).

In 1876 he was an unsuccessful candidate for the Academy. He died suddenly at La Rochelle on the 27th of August 1876. (From ArtSender.com)

Report an error on this page